We carry out experiments at external PW Laser facilities, such as Phelix in Darmstadt and SULF in Shanghai, which offer significantly higher pulse energies (at the expense of repetition rate) compared to the JuSPARC lasers.

These experiments allow us to gain experience with laser systems which may be part of a next JuSPARC stage.

The main scientific goal is to search for spin effects in relativistic plasmas. In particular, we

The field of laser-induced relativistic plasmas and, in particular, of laser-driven particle acceleration, has undergone impressive progress in recent years. Despite many advances in the understanding of fundamental physical phenomena, one unexplored issue is how the particle (in particular hadron) spins are influenced by the huge magnetic fields inherently present in the plasma.

There are two mechanisms which can potentially cause a polarization of a particle beam in a plasma: either due to a spin alignment in the direction of the magnetic fields or by a spatial separation of different spin states induced by the field gradients. The second scenario relies on the same principle as the seminal Stern-Gerlach experiment in which a beam of neutral Silver atoms is deflected in an inhomogeneous magnetic field depending on the spin state of the valence electron.

From our previous studies it became clear that the above mentioned effects are expected to be negligibly small for most laser-induced particle acceleration schemes. Even the spin precession according to the T-BMT equation can be neglected in many cases. Thus, compact (gas-jet) targets are needed in which the nuclear spins are already aligned at the time of irradiation with the accelerating laser.

For the realization of polarized nuclear targets we currently follow two approaches: 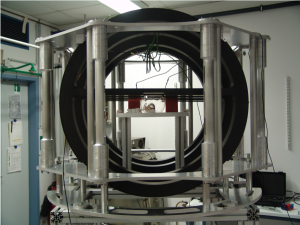 This work is carried out within the ATHENA consortium.

The use of nuclear polarized fuel, i.e. polarized D, T or 3He, for coming fusion reactors promises to increase their energy output and to optimize the complete fusion process in various ways. But before these advantages can be utilized, several questions must be answered and technical issues must be overcome. Among others, the members of the PREFER collaboration started to investigate the different challenges of “polarized fusion”.

Further information can, for example, be found in our book Nuclear Fusion with Polarized Fuel.

This website uses cookies to improve your experience while you navigate through the website. Out of these, the cookies that are categorized as necessary are stored on your browser as they are essential for the working of basic functionalities of the website. We also use third-party cookies that help us analyze and understand how you use this website. These cookies will be stored in your browser only with your consent. You also have the option to opt-out of these cookies. But opting out of some of these cookies may affect your browsing experience.
Necessary Always Enabled
Necessary cookies are absolutely essential for the website to function properly. This category only includes cookies that ensures basic functionalities and security features of the website. These cookies do not store any personal information.
Non-necessary
Any cookies that may not be particularly necessary for the website to function and is used specifically to collect user personal data via analytics, ads, other embedded contents are termed as non-necessary cookies. It is mandatory to procure user consent prior to running these cookies on your website.
SAVE & ACCEPT